Aprons are on my mind. I sewed four of them, starting with a free pattern online (https://suzyquilts.com/free-modern-patchwork-apron-tutorial/), and soon started to modify the pattern to make it my own, changing this and that, adding pockets. Then I went to Fabricland with my youngest son and he chose fabric for an apron—animals of the African Savannah—sepia on beige. He chose a bold white on brown polka dot fabric for the lining. When I finish the apron, he thinks he might wear it while tattooing (it will get covered in ink). I bought some lovely tablecloths and placemats at Value Village, piled up now on my sewing table, which I’ll cut and shape into another apron for a friend who loves purples, pinks, and blues.

What is the appeal of aprons? I love their practicality, their long history worn not just as a cover by women to protect their good clothes when they cooked and cleaned, but worn also by craftspeople, tradespeople, waiters, workers of all kinds throughout the ages. The cobbler at his bench, the candlestick maker pouring wax, the man with tongs at the forge, the woman throwing pots, the child sloshing poster paints over a piece of newsprint.

I want to write a poem about aprons.  During my year off, I signed up for “Masterclass,” an online offering of video classes by “masters.” For us, this expense has been mostly a waste of money. We paid $240 for a one-year subscription because I was intrigued by the idea of learning how to write a novel from Margaret Atwood. I soon discovered that although she is  a wonderful writer, she does not inspire me. She seems truculent in her mini-lectures, and she says things like, “the garbage can is your best friend.” I feel discouraged. So I watch a few videos of David Sedaris talking about how to write humour. He says we should write in a journal. Of course. Don’t we all already? But I’ll never be very funny. So I abort that class.

I don’t want to learn percussion from Sheila E. or Skateboarding from Tony Hawk. Nor am I interested in cooking with Wolfgang Puck or building a fashion brand with Diane von Furstenberg. But Billy Collins, the poet, seems promising. So I start to listen to his videos, to read his poems, and I feel encouraged. “Poems are the expression of thoughts and feelings, but they are no longer embarrassing, sort of like a diary without a lock.” I like that. He invites us to write a sentence, the first sentence, and then shape it into four lines for the first quatrain of the poem. So I do that. And then I write another, and another. And the poem, like the apron, grows.

I want to write a poem about aprons

The boy who wore my first apron—a
simple Home-Ec project in denim—was
jeered at by the other kids in the mall
where we hung out to smoke and flirt.

He pranced around the spewing fountain
in the badly sewn thing, making lewd
gestures, cupping his groin. Everybody
mocked, so I joined in their laughter.

Uneven seams, unravelling, only an hour
old and the pocket falling off already: a
garment of mistakes. Sewing is for old women,
home economics a massive bore.

In those years, a pattern coalesced:
over and over, I betrayed myself.
The second arrow, finding my raw
heart, buried his head in the pulp.

Perhaps I want to sew aprons
now to atone for my crimes against
myself, self-betrayal just another
stab at finding love when I was young.

I dump drawers of fabric on my
sewing room floor, mounds of blue
and green crash like gelid waves
off the coast, a tossed bed for the sunset.

Colours and patterns converse
as I move the hot iron over their
grateful hides. Next, the rotary cutter
slices straight lines to invent a silhouette.

The machine hums with ambition,
the brown paper, resisting my pins,
crinkles and bends, and I cut with the
grand yellow-handled scissors—a shape.

The thing comes together by itself—I, only
a hand maiden, am guided to choose, to match,
to press, and slice, and pin, to cut and shape
and press again, deferring to a greater power.

they blow the score for a blockbuster movie, a
dramady called Madeline Makes Aprons,
the story of a girl who slowly learns the art
of loving the shadow, the mistake, the first creation. 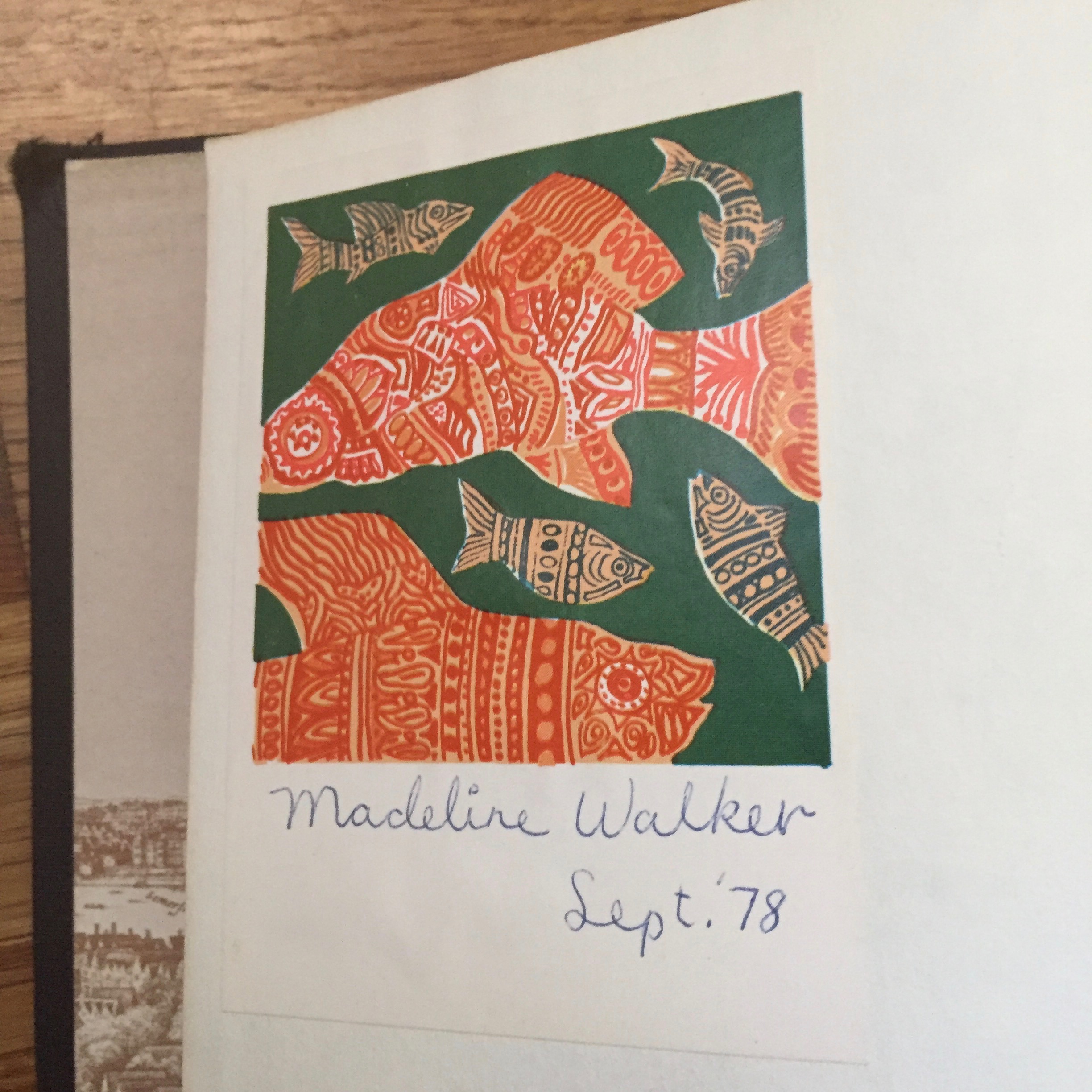 “The writer is someone, who, embarking on a task, does not know what to do.” Donald Barthelme

I am reading Station Eleven by Emily St. Jean Mandel. Although I read Atwood’s MaddAddam trilogy, I haven’t really been curious about dystopian novels. But this book has me turning pages hungrily. One of Mandel’s themes is the persistence of the works of Shakespeare after the collapse of civilization. This got me thinking of what I know and what I don’t know and what to write about for story number eight.

What did Mandel know, I wondered, in order to write this so-readable novel? She looks blessedly young on the book’s back cover (b. 1979). Yet she writes confidently about Shakespeare, Toronto, BC’s Gulf Islands, pandemics, the life of an aging artist, multiple marriages, paramedicine, the end of civilization… and I am only on page 77. She mustn’t have “known” all this to start. Into the cauldron goes the writer’s research, experience, and imagination. Boil them together with a bit of newt’s eye and bat’s wing to produce fiction.

The old saw about “write what you know” keeps the writer in the silo of lived experience, starved for oxygen. You need all of it—research, imagination, experience, serendipity—to thrive as a fiction writer. One way to write yourself out of what you know and into what you don’t know is to use Peter Elbow’s loop writing methods described in Writing with Power. I decided to use the one where you sit down and write everything you think you know about a topic, then use that as fodder for a story. Mandel’s novel starts with a production of King Lear, so I thought why not use that play? I proceeded with interest.

What do I know about King Lear? Well not much. I studied the play in the late seventies with the late great Northrop Frye. I still have my Pelican Complete Works of Shakespeare with my fish bookplate dated 1978, the year I took my sole Shakespeare class at University of Toronto, Victoria College. Frye was an eminent scholar, yet I remember little from the class. I do recall his long pauses as we waited with baited breath, our pens raised, ready to record his wisdom. And the only thing I remember from his lectures was not even about Shakespeare—it was about music. He said that Bach’s Mass in B Minor was surely the voice of God speaking through the composer. As for King Lear, well I remember only that I loved that play the best. A few of the most famous lines stick with me, and I notice as I page through the play that almost forty years ago, my twenty-year old self carefully circled in pencil any mention of nature, natural, and unnatural. I must have written an essay on that theme.

But really, what do I know of Lear? I remember my father joking with me, the youngest of his three daughters, that I was his Cordelia. A rather odd comparison, as I think of it now, but I loved his rueful laugh when he said it. Then there was my first husband’s favourite line from the play, “Reason not the need,” from Lear’s speech in Act 2, Scene 4:

O, reason not the need! Our basest beggars

Are in the poorest thing superfluous.

Man’s life’s as cheap as beast’s. Thou art a lady.

If only to go warm were gorgeous,

Why, nature needs not what thou gorgeous wear’st,

Which scarcely keeps thee warm. But, for true need—

My then-husband’s occasional invocation of that line has stayed with me these many years. When frugality became a constraint, he would implore, “reason not the need.” Let us not reduce our lives to need, to scrape by on the drab thrift store clothes, to make black bean soup again. Even beggars need a bit of splurge and splendor. Let’s treat ourselves. You only live once.

But there you go. What do I know of King Lear? A long ago reading for a Shakespeare class almost forty years ago. Frye’s wavering voice. A remembered association from my father’s mouth that cast me, in jest, as his Cordelia. A line spoken by my ex-husband that reverberates still. Reason not the need. And a bleak sadness when I think of Lear, a “poor, bare, forked animal” on the heath.

It was an interesting exercise. I really don’t know much about Lear. An embarrassingly small amount of material, in fact. But I was able to gather enough together to start. I wrote what I know, and that will lead me into what I don’t know. A few shoots that might sprout a story that is more interesting than my experience. Perhaps research will lead to a character based on Dr. Frye. Perhaps a re-reading of King Lear that may lead to something. Or another listen to Bach’s Mass in B Minor that might be fruitful. Or perhaps I can write a story with one character who always reasons the need and another who resists that dictum. Or a contemporary father who sees his daughters as modern-day versions of Goneril, Regan, and Cordelia, and those joking nicknames become more real than he ever intended. So many stories waiting to be written. 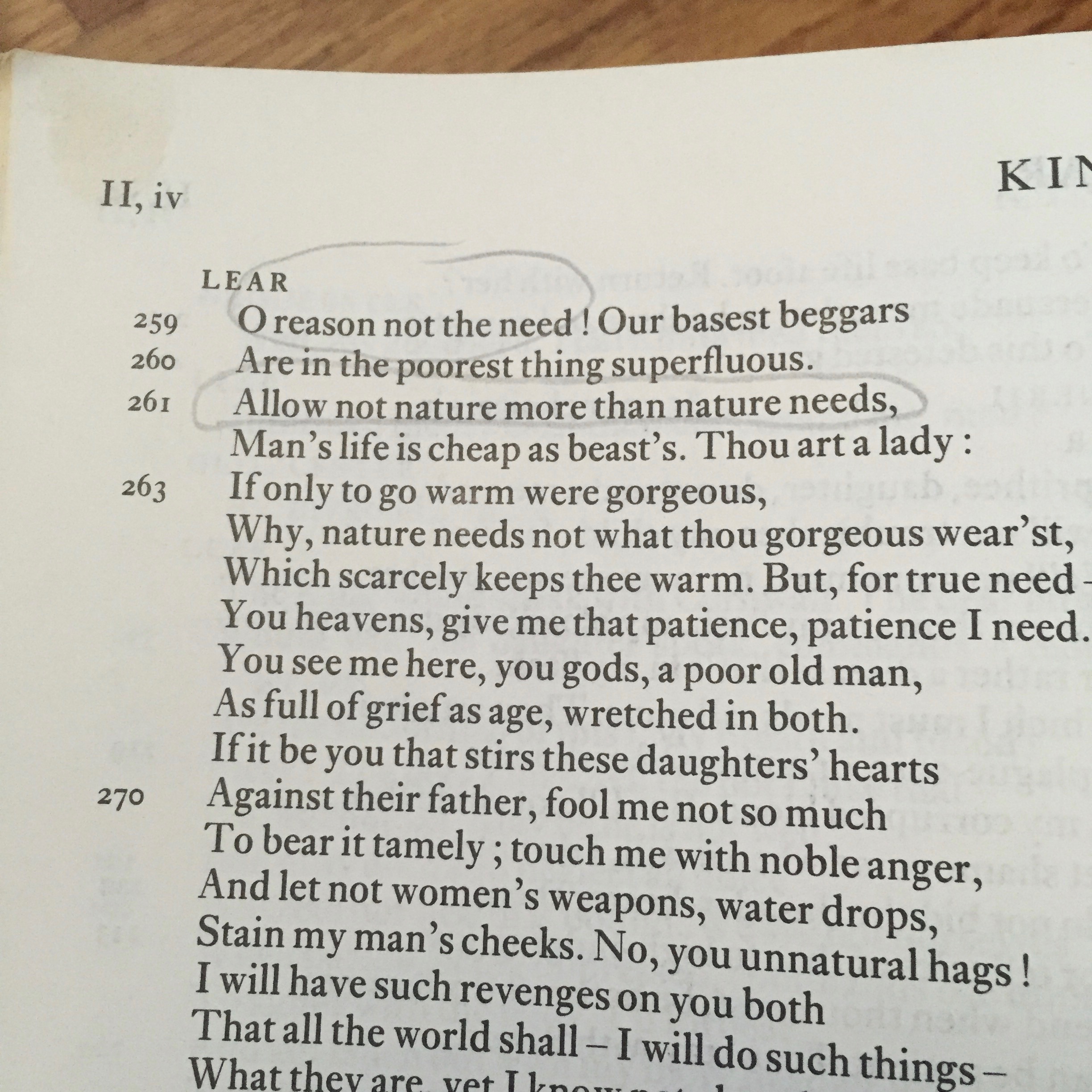 I do not know what to do, exactly (see Barthelme), but I know that limiting myself to writing only what I know is the equivalent of Goneril and Reagan’s telling their father, you don’t really need all that finery, that retinue. I join Lear in saying, “reason not the need.” Let me read, research, imagine. Let me grab from a cornucopia of ideas, thoughts, books, facts, art, beauty, and experiences to make stories. Here I go into story number eight. I’ll report back later.