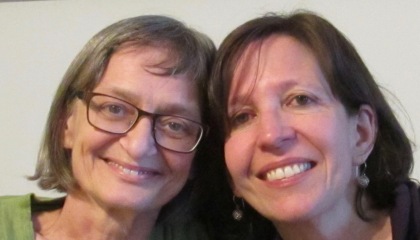 When Hanna came to visit, she brought candy. Not dark chocolate for the adults, but Twizzlers, sour worms, stuff kids devour. She sent birthday money and cards to my children. One summer she came to visit from Ontario and listened to my teenage son play clips from the music he was loving that season. She leaned in attentively when he described to her why he liked it. She was interested.

You were welcome at her house. John would make a beautiful latte for me while Hanna and I caught up on news.  Even if it had been over a year since our last visit, our talk felt seamless. It was that kind of friendship.

When I visited her in Toronto or Bradford, she would often drive me and whatever kids I brought with me up to my father’s farm and stay for lunch. She loved the green fields and the trees, the pond fringed by weeping willows and graced with swans. She loved to help others, and she thought nothing of going out of her way, driving three hours just to get you somewhere.

A few years ago, I visited Toronto with my new husband, and when I called to ask if we could see her, she invited me to the hospital where she was staying at the time. I was surprised and worried, but she treated the whole thing as natural, greeting us from the metal bed as if she were sitting on the couch in her living room.

Although self contained, sometimes she opened like a peony. We sat cross-legged on her bed once, and she lifted up her shirt to show me her mastectomy scars, raw ridges across her breastbone. She knew about impermanence, about the art of losing.

And she was loyal.  Though we didn’t see each other much, we remained friends for over 30 years. She always asked how my kids were doing, my parents, my sisters. And it was genuine, never pasted-on.  When my book of poetry was published a few years ago and a small launch was held in a Queen Street bar, she made sure she was there to quietly support me, even though she wasn’t well, and I could see it took prodigious effort to get there.

She threw the spotlight on others by drawing attention to their achievements whiledownplaying her own considerable ones. She saw mistakes and problems in the kindest light—her gentle brown eyes and wide smile encouraged you to just be yourself, it was okay.  She accepted you. “Oh Mad,” she would say, with a sing-song lilt—starting high on the “Oh” and down a perfect fifth on the “Mad.” Empathetic affection. We’re in this crazy world together.

The last time I saw Hanna was around a year ago. She was pretty sick, yet still going to work, her job another focus of her loyalty. She had always exuded a spritely energy, a kind of no-nonsense way of moving around her environment. But in the last couple of visits, she had slowed down and was finding her body unwieldy.

She had taken up knitting in a big way—following Arne and Carlos, the Scandinavian knitting duo. She wrote their names and blog address in her neat script on a post-it note for me to take home. We sat together on her living room couch, admiring her colourful hand-knit socks. “Maybe,” I told her, “I’ll take up knitting too.” Knitting keeps your mind off things, off the future, she told me. “You have to pay attention,” she told me, “or you’ll drop a stitch.”