Madeline: “I’d like to go that big yard sale tomorrow,”

Madeline: “But maybe you’d rather not. I guess we have something else planned?”

Michael: “Don’t walk it back! If you want to go the sale, you should go to the sale.”

Michael has noted that I have a habit of “walking it back.” I put forward an idea, a desire, a need. Then I rapidly withdraw it, sometimes not completely, but I often pull it back at least partially in a sentence laden with doubt. I offer qualifications for the original ask, or I might revise it entirely, deciding I don’t want it after all if it 1) inconveniences another person or persons or 2) makes me appear to take up too much space in the world (literally andmetaphorically).

I’m glad he brought this to my attention—I often don’t see my practices and habits; they are so embedded in my “personality,” I don’t recognize them for what they are. I believe the “walking back” behaviour is linked to a primal fear of claiming my place in the world, filling up space—taking up room physically, emotionally, spiritually, and psychologically.

Looking back over old journals as I write my memoir has been painful and illuminating.  I started to think that perhaps “walking it back” is the trace of primal wounds that manifested in a different way in my teens and twenties. I saw my references in journals to bingeing and purging, and I could see my bulimia as the prototypical instance of “walking it back.”  According to the New Oxford American dictionary, bulimia is an “emotional disorder involving distortion of body image and obsessive desire to lose weight, in which bouts of extreme overeating are followed by self-induced vomiting, purging and fasting.”  One root of the word is from the Greek “ox hunger” (bous + limos).

That fits because there was a “black hole” inside me as big as the hunger of an ox, representing the need to be loved, accepted, to be seen, to be enough.  To fill it I would secretly eat and eat.  I remember secreting away a whole tin of homemade orange-flavoured cookies my grandmother sent one Christmas, hoping nobody would notice that most of them were gone when I replaced the tin in the morning.  The taste of my stomach acid laced with orange kept coming back up my burning throat and into my mouth for weeks.  The shame I felt every time I entered the bulimia triangle was debilitating, yet whenever I succumbed to this pattern, it felt inevitable, the only way to temporarily fill the unfillable hole.

Eating is a way of claiming something—Hey world, I am trying to fill up my cavernous need even though I know this won’t work for long, it never does. Almost immediately, I would feel terrible guilt and shame about claiming that space, the actual physical space of the fat person I might turn into. The fear of my fat body taking up space in the world, more space than was acceptable, sent me into the purging phase, trying to bring up as much food as I’d shoved down.  That is a way of walking it back. . . I regret claiming space, I need to undo that expression of desire. Maybe if I bring it all back up we can pretend it never happened.  Not only did the bingeing never happen, but I never had a need to be loved, there is no black hole. I am fine. Just fine. The performance of pretending I am okay, I am self-sufficient, I don’t need you: A hard role to play all day, every day.

Susan Bordo sees bulimia as a result of the double bind that modern society puts women in—we must perform as if we are always confident, self-sufficient, self-disciplined, and the price we pay is an inexorable letting go: “Many of us may find our lives vacillating between a daytime rigidly ruled by the “performance principle” while our nights and weekends capitulate to unconscious “letting go” . . . In this way the central contradiction of the system inscribes itself on our bodies, and bulimia emerges as a characteristic of modern personality construction” (477).

As I read Bordo and think about bulimia as a systemic problem, I wonder if thousands of other young women were doing what I was doing, are doing now what I was doing for over a decade.  The secrecy of it makes me so sad. Perhaps I left traces of my disorder, a smell of puke in the bathroom, missing cake, chocolate bar wrappers. . . but mostly I think it was hidden from everybody who loved me.  How sad I am now to think that I “performed” my life so much of the time.

Bingeing and purging are part of my distant past, but Michael’s urging me to not “walk it back” is a loving reminder that I still sometimes fear being a woman on the earth who has needs, desires, and preferences. A reminder that I can and should take up room in every way. I claim my right to be here. I speak my truth. Two of the ways I do that is by writing and drawing. 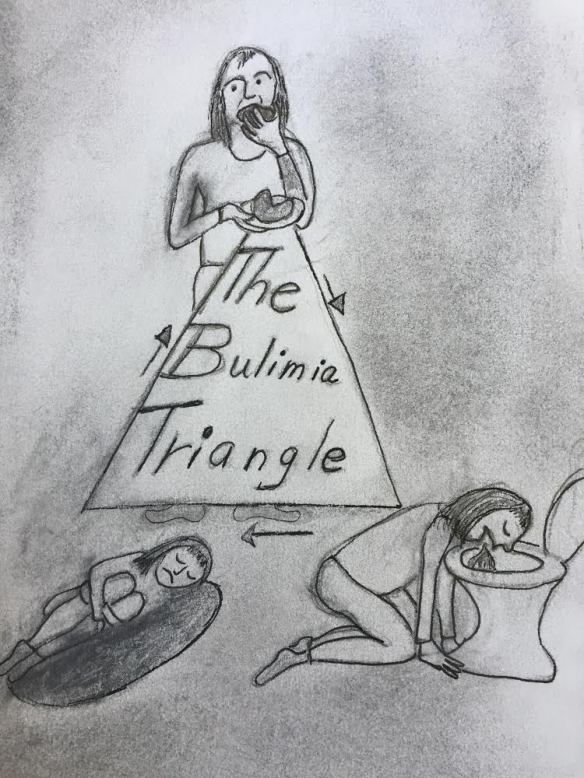