Lit from within is the sole secure way
to traverse dark matter. Some life forms —
certain mushrooms, snails, jellyfish, worms —
glow bioluminescent, and people as well; we
emit infrared light from our most lucent selves.
Our tragedy is we can’t see it.

From Robin Morgan’s “The Ghost Light”

As I get older, I am scared to do new things. Sometimes fear sucks the life and juice out of my plans and ideas, drying them in my solar plexus where they rattle around for months, even years. I can feel one or two in there now.  Those husks are like the bone-and-fur pellets—all that remains of their prey—that owls disgorge in the night. But the good news is that when I walk through fear, my plans and ideas can be reconstituted.

For over a year, I contemplated the bike racks on Victoria’s BC Transit buses.  I’d watch a nimble cyclist enter the space in front of a bus, pull down the rack, and lift her bicycle up and into the metal grooves. Her quick hand motion somehow moved a slender, rubber-clad arm up and over the front wheel. There seemed to be some mysterious communication pass between the driver and the cyclist both when the cyclist secured the bike and again when she removed it at her destination. How could I ever hope to know what was going on there? And with such weak arms, how could I possibly lift my bike onto the rack, place the wheels precisely into the grooves? Hopeless.

But I wanted to. Dusk begins before 5 p.m. these days, and I don’t want to ride home in the dark. But the mornings—well the sunrises are spectacular on the commute to work, streets frost-rimed and crisp as my wheels spin down the pavement. Smoky red-violet light blooms in the sky, heralding the sun’s bright burst of glory.  And it’s good exercise, my 45 minute commute, exercise I need. Another selling point: The Galloping Goose and Lochside trails have few riders this time of year.  Wouldn’t it be nice to ride to work in the morning and at the end of the day, pop the bike onto the rack and relax on the bus ride home, watching colourful Christmas lights slide by?

Feeling scared, I procrastinated. I didn’t know how to do it, wasn’t part of the bike rack club, one of the initiated. The bus driver would get annoyed with me. Other riders would feel irritated by my clumsiness. What if I did it wrong and my bike flew off the bus and caused an accident? Oh and the rack would probably already be taken up by other bicycles. Then what?  The list of fears and reasons not to act went on and on, dehydrating my plan until it was just a dry pellet.

One day I’d had just enough of myself, of the dry fear pellet knocking around my middle. I watched the video on BC Transit’s website on how to use the bike racks, then walked my bike over to the bus stop after work. I was lucky that an acquaintance of mine happened to be in the line-up, a philosophy student I’d coached. So I told her about my fear, and she admitted to also feeling paralyzed at the thought of doing new things. I felt less alone.  We chatted and I forgot to be scared.

When the bus arrived, I stepped in front of it and pulled the bike rack down. Just as I had imagined, I found it hard to hold my bike up and away from my body, then navigate its wheels into the grooves. I faltered a couple of times, almost dropping it. A young woman waiting for another bus saw what was happening and came quickly to my side. She helped me manoeuvre the wheels into the spaces, then showed me how to pull the locking bar out and over the wheel, how to test that it was secure.  When I got on the bus, the driver instructed me to give him some notice before my stop. I felt relieved.

I chatted with my philosophy acquaintance about C.S. Lewis and the four loves, about religion and being brought up as atheists—an experience we shared, about Iris Murdoch, and about marking papers. Such a delightful opportunity to discuss ideas and feelings.  Occasionally, I’d look up and see my handlebars through the front window and feel a ping of pleasure. I did it!  When I got off the bus and removed the bike, I flipped the rack up, made eye contact with the driver and gave him a thumb’s up as I moved out of the way. He nodded at me.  I was initiated.

The second time was a little easier—again, someone came to my aid when I faltered. (Oh, the kindness of strangers!) Third time was smooth; I needed no assistance, felt confident. Fourth time, I felt like an old hand, like I’d been doing this forever, what was ever the problem?

Fifth time I had to take the bus both to and from work because my tire deflated 10 minutes into my ride. The tires on this new bike of mine have Presta valves, and I was used to Schrader. I hadn’t paid full attention when Michael showed me how to use the pump on my tires. So when I inflated the back tire because it was feeling soft, I forgot to screw the little nut clockwise on the valve, and the air slowly leaked out as I rode.  When I noticed I was riding on a flat, I said to myself, no problem—I’ll take the bus.

After the workday, I put my bike on the bus home, and the friendly driver commented, “nice bike.”  I agreed it was a great bicycle. Then I mentioned my problem that morning with the deflated tire.  I took a seat near the front and fell into a reverie. After a while, the driver pulled to a stop to let some passengers on, and a big truck swiped the bus, cracking the side mirror. The driver was shaken up, and he announced to us that he’d do his best to fix the mirror with a rubber band, but he wasn’t sure it would hold and we may have to get off and wait for the next bus.

The rubber band held for about seven stops, keeping the glass fragments in their frame.  But then the driver, a kind and patient guy in his fifties, stopped again and announced that the rubber band had snapped, and he’d have to find some kind of replacement. He was pretty upbeat about it—not defeated yet.

“What do you need?” I asked. “Maybe I have something in my purse.”  “Well as a matter of fact,” he smiled, “I’ve been eyeing that bungee cord you’ve got on your bike basket. That would be perfect.” “Oh, that’s a great solution. Take it—it’s yours!” He removed the cord that I keep strapped onto my bike’s wire basket and wrapped it around the mirror until the glass shards, like puzzle pieces, were secure again in their frame.  “Perfect,” he said as he came in from the cold and closed the doors. “We’re legal.”

As I got ready to get off the bus, he thanked me for the bungee cord.  “Hey, if you hadn’t had the problem with your tire deflating this morning, you wouldn’t be here now giving me the bungee cord. You saved the day!” I smiled at him and waved at the passengers. They waved back and a few called out their thanks.  My bungee cord had helped them avoid a long delay in their travels home.

These days, fear seems to loom large over small things, things like putting a bike on a bus rack. But when I go forward and just do those things I fear doing, in the 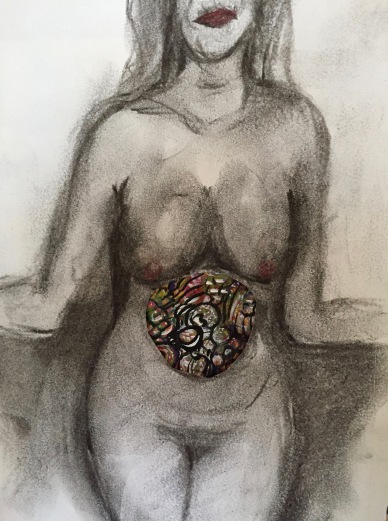 “where fear lives/lit from within”

words of Robin Morgan, I feel lit from within. I come forward, out of my safe cocoon. I engage with people—kind strangers, grateful passengers, and a gentle bus driver.  I engage with life.

Note on the illustration:  Credit to Nathaniel Churchill (thanks, Nat). I used one of his paintings behind the cutout in my sketch.  It occurred to me that this piece illustrates not only fear-pellets in the solar plexus, but it can also be interpreted as the experience of feeling “lit from within.”  Life is full of paradoxes.

5 thoughts on “Moving through fear”