As I get older I think of paths not taken. For example, in my twenties, I dreamed of writing a weekly column for a big paper. In the 1980s, I devoured film critic Liam Lacey’s articles in the Globe and Mail, loving his clever analysis and enormous vocabulary. Now I look forward to reading columns by Ian Brown and Elizabeth Renzetti in the same paper. To be a columnist means that not only do you write for eager readers, but also you are constrained—beautifully constrained because the deadline makes you work hard and generate ideas and heat up with fecund energy (at least this is my fantasy). None of the passive doodling that writing becomes when there is no real audience, no real deadline. Too much of that kind of writing and my creative spirit retreats and shrivels. 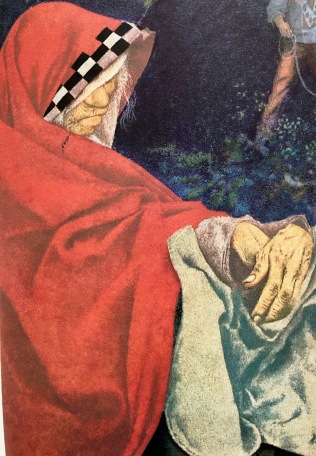 So, I thought, why can’t I pretend I have my own column? You are reading this right now: Will you be my audience? I will set myself some constraints: six “columns” in six weeks. Then, lying in bed unable to sleep the other night, I wrestled with content. What will the columns be about? After mulling over this for some time and writing scraps of ideas on bits of paper in the pitch black so as not to wake Michael, I thought of poetry. I will take ten books of poetry off our shelves—no thinking, just the first ten I come across.  Shut my eyes and open each book and place a book mark in that page. Then I have a bit of choice; from each of those ten open pages, I will choose a lines or series of lines or a stanza (whatever makes sense).  Those lines then will become the pool I will choose from for the six columns. Those lines will be the titles that suggest ideas or themes for writing. I won’t necessarily write about the poem or poet or even poetry. . . the line or line will be a springboard for ideas, generating who knows what? That is the exciting part. Anything might come up!

Other constraints:  each column must be 500 to 750 words and accompanied by a sketch or image  created by me. My hope is that weekly deadlines will banish preciousness and perfectionism.

Playfulness comes in the midst of what feels like gruelling work: I am preparing to teach technical writing again in September. And I have taken on an editing contract. In the midst of preparing and planning, creativity bursts forth, a project is born. Something wants to be written, but it doesn’t know yet what it is.   Inspire me, poets.

Expect the first column in one week, based on these lines from Jan Zwicky’s “Cashion Bridge”:

Pamela gave me this precious book for my 60th birthday

P.S. Yesterday, when I heard that Toni Morrison had died, I felt both sadness and gratitude. Sadness that we have lost such a star and gratitude for her immeasurable contribution to American life and letters. She was a great artist, thinker, humanitarian, and activist. I had the privilege of teaching her novel Beloved more than once to undergraduate students (and it took me several reads to understand it—it is so rich). I can’t believe that at first I rejected it, saying “I don’t like ghost stories.” Whew–how ridiculously rigid I was! Thank goodness inspiring teachers helped open my mind.

I also chose to teach The Bluest Eye and Song of Solomon, both amazing in very different ways.  Paradise is another gem, and her literary theory book, Playing in the Dark: Whiteness and the Literary Imagination (1993) is insightful and startling, even today. Through her evocative, deeply-felt stories, I learned about endemic racism, the horror of slavery, and the African-American experience better than I ever could via history and non-fiction books.  Some lines from Beloved will always stay with me. At the end of the novel, Paul D. tries to explain to Sethe his feelings about her, so he recalls what Sixo said about the Thirty-Mile Woman: “She is a friend of my mind. She gather me, man. The pieces I am, she gather them and give them back to me in all the right order. It’s good, you know, when you got a woman who is a friend of your mind.” I just found out there is a documentary about Morrison titled “The Pieces I Am.” That line from Beloved, then, has clearly touched many hearts.  Good-bye beloved Toni Morrison (Chloe Wofford).

P.P.S. Thank you so much for all of your encouragement and comments on the travel blogposts that Michael and I wrote.  We loved hearing from you, and Michael enjoyed the experience so much, he is thinking of starting his own blog. I’ll let you know when he does. xoxox

5 thoughts on “The six column project”