By Madeline and Michael

Madeline: We could be driving anywhere—in a way, it doesn’t matter because it is all about the internal journey. One of the things we’ve been balancing and talking about is spontaneity and discipline or restraint (near antonyms of spontaneity).  Michael calls the force opposing spontaneity (and one he associates with his own character) as “stick in the mudness,” though I don’t see him this way at all. He has a tonne of carefree magic in his soul balanced by “Great East Discipline” (one of his Buddhist names, which is very fitting).

We have tried to balance these two energies between us on this trip while we balance them in ourselves.  Perhaps Michael has more discipline than I, and he has taught me that we need to spend the longer days in the car to cover the kilometres (Canada is enormous).  Perhaps I have more appetite for being impulsive (“let’s stop at this lake and swim!”), but we need both of these energies to make the trip go. If Sponty runs the show, we follow every whim, popping into thrift stores and following hiking trails for an elusive kingfisher, and we never actually get to Toronto. If Sticky runs the show, we get there in record time, but exhausted, never loosening up and letting bursts of impulse reveal the magic in the everyday. 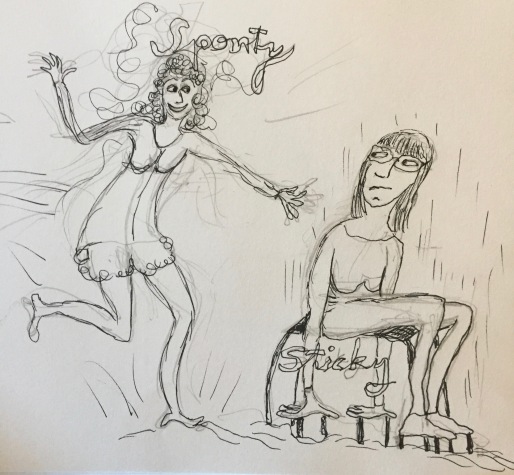 We have had some longer days, like July 16. We left the Soo at 8:20 a.m. and arrived in Kenora at 5:20 (well, 6:20, but we slipped into the Central Time Zone at some point). Pacing ourselves with frequent breaks and seat switches, we made it to Kenora feeling pretty good.

The long day (Soo to Kenora) made Winnipeg on July 17thpossible! Thunderstorms were predicted, so rather than camping (which we still haven’t gotten around to), we decided to do a short day, arriving in Winnipeg in the early afternoon and exploring.  What treasures we beheld…

We wandered into Á la Page, a comfortable, homey business selling second-hand books at 200 Provencher Blvd. in St. Boniface, and found that all books were 50% off!  The green corduroy couch near the front of the store beckoned—so comfy. I sat down and started paging through a book on intuitive healing while Michael looked at a book of Buddhist art. The catalogue had a definite leaning toward the metaphysical, and more than half the titles are in French.  I asked the young man at the cash desk if the place was going out of business because the half-price sale seemed to me a sign. “Not yet,” he laughed. We chatted about how you have to be passionate about books to run an independent bookstore. I feel recommitted to supporting Victoria’s independent bookstores. 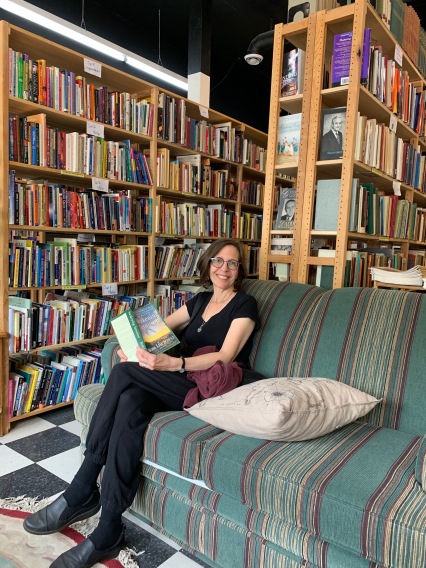 I loved St. Boniface not only for its charm and beauty, but also because I felt so comfortable speaking Anglais, whereas in Québec not so much. I had a thought I’d love to spend a summer in St. Boniface learning French and getting to know the neighbourhoods.

In the evening, we discovered a textile show by three Franco-Manitoban (is this a proper descriptor?) women—what a find! I fell in love with Rosemarie Péloquin’s felt faces and heads that depict old age in a truthful and tender way. 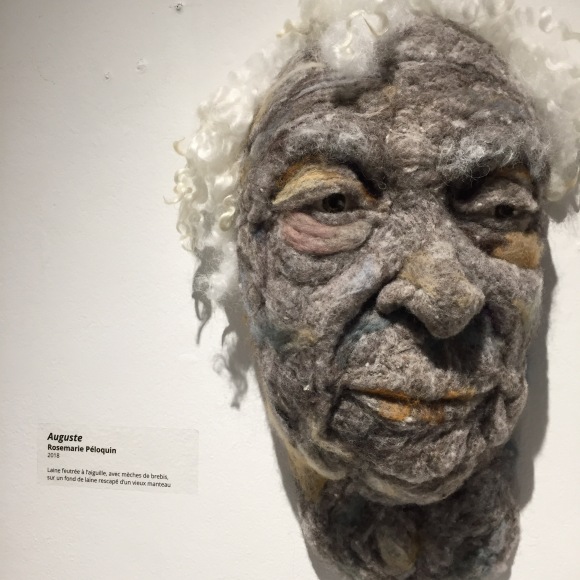 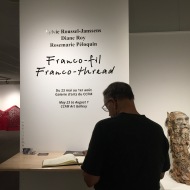 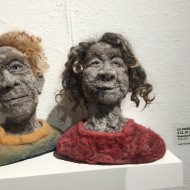 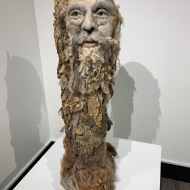 On our Winnipeg afternoon, we wandered. We embraced what we came upon in our wanderings.  Discipline builds the dance floor for the jazz-dance of spontaneity.

Michael: One of the things I am learning on this trip is that Sponty helps me to open to the world with a child’s heart, and when I do that I find unforeseen jewels, such as Medicine Hat which I wrote about in an earlier post. Today I am reflecting on the magic of Manitoba.

Waking up in our little Jackfish Cabin and seeing a weather forecast of thunder storms, we decide to drive to Winnipeg, enjoy a shorter day, and see what we might find.  What follows is completely magical.

We meet Barry S. Shore, owner and proprietor of Fat Cat Records.  As Barry said, he “used to shoot for Warner Brothers”, and his walls were adorned with black and white photos of rock stars, clearly shot from the close to the action vantage point of a press photog— exquisitely, dramatically, and lovingly framed, faces wearing many masks: passion, sadness, feral snarls. Fat Cat specializes in West Coast Blues, which Barry explains to us is a sub genre of the blues with elements of jazz and bop built in.  He has only been open three weeks, but this is his third record store, and this way he only has to sell the stuff he likes.  He says the store gives him something to do  in his retirement—hmmm, is there a theme here? We buy a music-themed print, a Fat Cat Records tee shirt and a Lynwood Slim CD.  I am often struck by synchronicity, and as we leave it strikes me that we’ve been listening to Stuart McLean’s stories about Dave, owner of the Vinyl Café, Canada’s smallest record store. Wow, I think, we just met an aging Dave and visited the Vinyl Café! 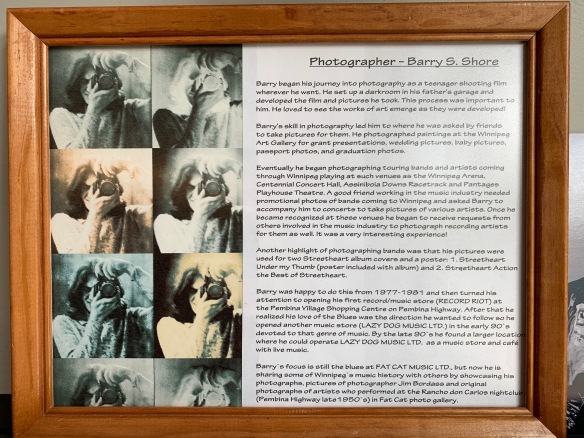 Winnipeg Fringe is on, and after attending a stand up performance in St Boniface, we venture out for a walk on the boulevard. I wear hearing aids, and at times the internal combustion engine is the plague of my existence–cars without mufflers and motorcycles assault my senses in the most shocking and violent way.  Today is one of those days, so I want, need respite. Across the street we see green grass beside railroad tracks and walk towards it, expecting tracks, grass, little more.

Instead we find a path that leads to a footbridge over the Assiniboine River, and a forested glen with a winding path.  The reflections of the forest in the river, the sweetness of birdsong, Madeline’s hand in mine and our shared silence are entrancing and nourishing in a way that I really need.  Another unexpected jewel. 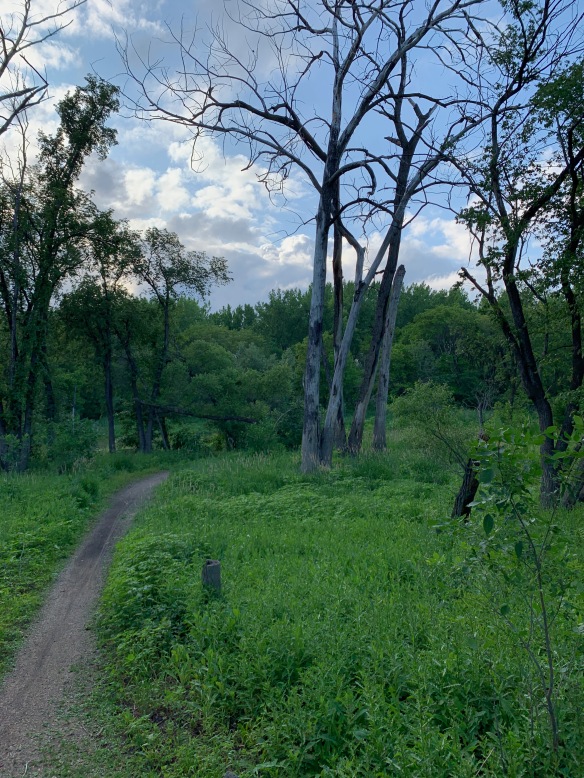 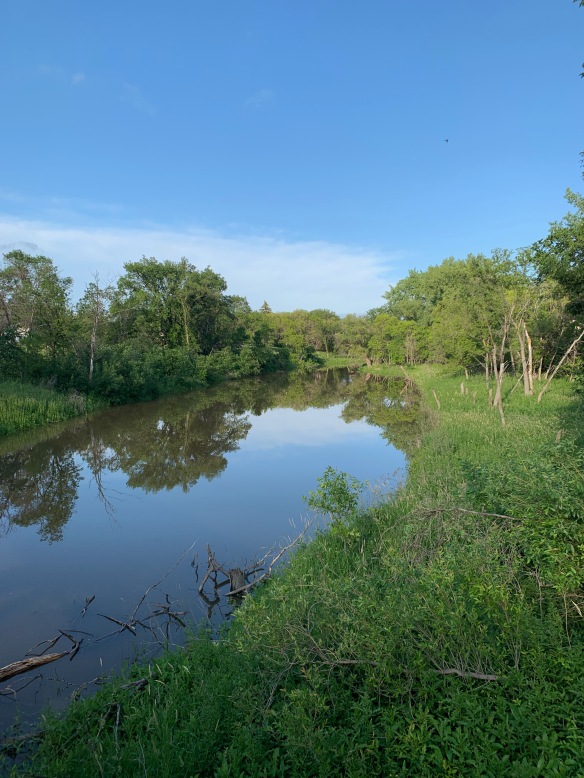 As we return across the bridge, we find remnants of paper fastened to the bridge deck, printed but no longer legible.  A placard explains that this is an art installation, Pages and Passages by Eric Plamondon. The pages are pulled from the stories of 30 Manitobans-poems by Louis Riel and Gabriel Dumont, but also more modern folk. Each pedestrian and cyclist can read the stories, but their passing obscures them a little more each day, thus with the passage of time we affect each other’s stories. 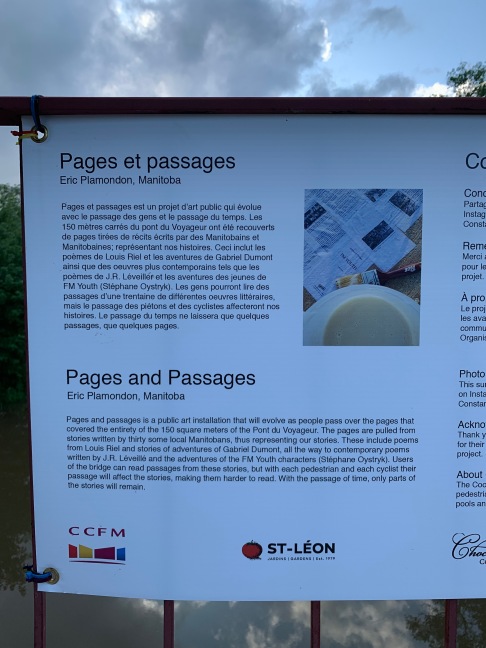 I have been thinking a lot about privilege on this trip, about how my privilege manifests in blind spots, which by definition I can’t see. This is another jewel-an opportunity to see how in just living my life, in just passing through, I affect the stories of others.  I return to the road with a deep sense of gratitude and magic.

2 thoughts on “Sticky and Sponty”