On Hallowe’en, after eating Michael’s amazing lamb curry, we went for a walk around the neighbourhood. Dusk, and the veil between the worlds was growing thin. We saw some spectacular sights: skeletons rattling from tree branches, dozens of glowing jack-o-lanterns, front-lawn cemeteries, and even fog machines blowing eerie mists over cardboard gravestones. We saw a few costumed kids, as well, and were reminded that we had no candy in our house.

On our return home, we closed the living room blinds and turned out the porch light. My husband printed a sign and taped it to the front door so there would be no confusion: “Sorry, there is  no candy available here. Please be safe and enjoy your Hallowe’en.” We are out of the habit of distributing candy to trick-or-treaters not only because our children have grown to be men, but because we rarely eat white sugar anymore.  My body suffers when I eat sweets—I experience an immediate high then a crash with aching joints and deep fatigue. So doling out mini Snickers bars or bags of M&M’s seems cruel. (Apologies to my own children for feeding them so much sugar over the years.)

We settled down to watch a movie, a documentary about Fred Rogers called “Won’t You Be My Neighbour?”  Mr. Roger’s Neighbourhood made its debut on national public television in February 1968. I didn’t watch the show as a child, but it aired until 2001 so my children watched it sometimes, and I always had a fondness for the show’s slow and gentle pace and the kindness reflected in the content.

As we watched, I found tears streaming down my face.

I cried when Fred Rogers, sitting on a low stool, angled his tall, lean body toward a small boy and listened carefully to what the child had to say. I cried when children thronged around him during his public appearances, and one little girl came right up to him and said “Mr. Rogers, I want to tell you something. I like you,” and he said “I like you too, dear. Thank you for telling me that,” and touched her arm. I wept some more when I heard him say, “I like you just the way you are” to the thousands of unseen children at home and again when I heard that the simple, scruffy Daniel the Tiger puppet spoke from Fred Roger’s own childhood fears and vulnerabilities. More tears came as I witnessed the kindness Rogers showed when he spoke to children about how confused, sad, or scared they felt about divorce, death, or war.  I cried out of sadness about my own childhood when I heard him say “Children have very deep feelings, just as everyone does.” And I cried the most when I heard him say that “Love is at the root of everything. All learning, all relationships. Love or the lack of it.”

It was my birthday present to myself, I realized, to release my sadness and joy through tears as I watched this movie. I feel happy that Fred Rogers created the show and made a difference in so many children’s lives. I suppose it was ironic that we hadn’t been neighbourly ourselves when we posted our “no candy” sign and shut out our young neighbours on Hallowe’en.

A few days later, I went to a craft fair with friends and found a man who carved wands out of wood.  A wand with a chisel design and a heart at one end caught my attention. After buying it for $10, I moved the wand through the air, imagining that as I waved it, love flowed from the tiny wooden heart and spread warmth and philia over those around me. I tested it on my two friends and a few of the craftspeople sitting at nearby tables. Feeling the immediate effects of the love wand, their smiles grew wide and shiny.  I was onto something.  So when I brought my wand and other purchases home, I thought back on Hallowe’en and imagined what might have transpired if I had in my possession that evening my magic wand. I would have cast a small yet convincing spell over all the children in the neighbourhood as they trudged house to house for treats. To the witches and zombies and superheroes—to all of them—I would have delivered a powerful message: You are loved just the way you are. 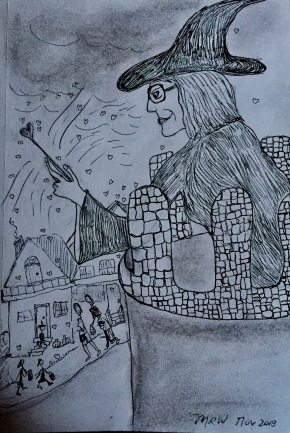 Michael’s Lamb Curry (the secret is in the onions)

Sauté onions, garlic, and ginger in olive oil over medium heat until you swear they are going to burn. Just keep turning them as they turn dark brown and you have to scrape them off the bottom of the pan. This takes a while. Meanwhile, pat the lamb cubes dry and fry in another pan in olive oil until brown, then deglaze the pan with a little water to get all the brown bits off.

Blanch and peel the tomatoes.

When onions are completely brown, add curry paste and fry into the onions, blending well.  Crush the tomatoes with your hands into the onion mixture. Stir. Add the lamb, the cut beans, and the chick peas, then mix in vinegar and honey. Add the cayenne to as hot as you like. Bring to a gentle simmer and cook 40 minutes or until the lamb is tender.